I love Instagram - it's like my new favorite toy and go to place for inspiration. One day I saw this tag called #onehundredfaces and having done a bit of drawing but not really I soon found myself tempted to throw myself into another project.

The idea is to create 100 faces. It can be anything you like. Drawing, painting, mixed media. Whatever suits you and for me, my weapon of choice was ArtRage which is basically just paper and pencil - but digitally of course.


I didn't start off on this journey with the intention of using the same guy for every single drawing but after the first couple of drawings an idea formed in my head.

What if I used photos of the same guy for all of my drawings. (And yes you definitely earn bonus points if you can see which actor it is) Would I be good enough for it to be obvious? And I loved the idea of seeing how one person change depending on age, hair, expression, mood etc.

Once that thought was planted in my head I knew I had to go with it. Some days I can see the resemblance. Others I fool myself into thinking that the reason there's little resemblance is because I've used an old photo. Others I just fail.

I'll be the first to admit that I'm lazy. I know there's like a million tutorials on the WWW that shows how to draw but I can't be bothered spending time watching them when I'd much rather be drawing. I know there are things I could probably pick up easier if only I took the time but instead I favor the 'Learning by doing' method.

This obviously means that I make mistakes. I add things that doesn't look realistic - or too harsh lines and shadows but with each new drawing I see improvements and some time sooner or later I'll actually be kind of decent.

I'm no where near ready to let go of my beloved ArtRage and ctrl+z. I know if I used pencil and paper there's this handy little device called eraser, but it's simply not the same for an old digital girl as myself.

Perhaps one day I'll be brave enough to test my skills on actual paper but I don't see it happening any time soon.

I want to improve my skills but at the same time I wanted to stay true to my style which has always been a more simple line. However as the weeks went on I realized this urge to keep it simple as a style had only been a way to keep it from being a real challenge. 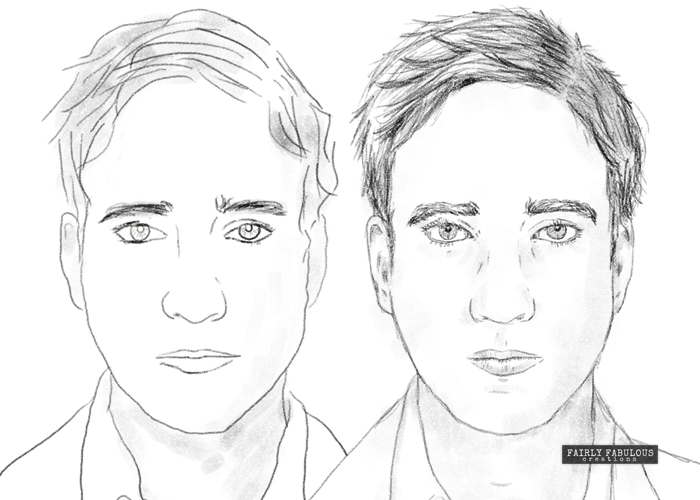 3 weeks into the project I decided to draw the same photo I had on that first day. I wanted to see just what I had learned in those 3 weeks and honestly I was a bit surprised. Sure I saw improvements on a daily basis but I hadn't expected this. Not only do I see a more detailed drawing but I also see a confidence as an artist building. I really ought to challenge myself more often.
April 07, 2015
100 Faces ArtRage Sketches