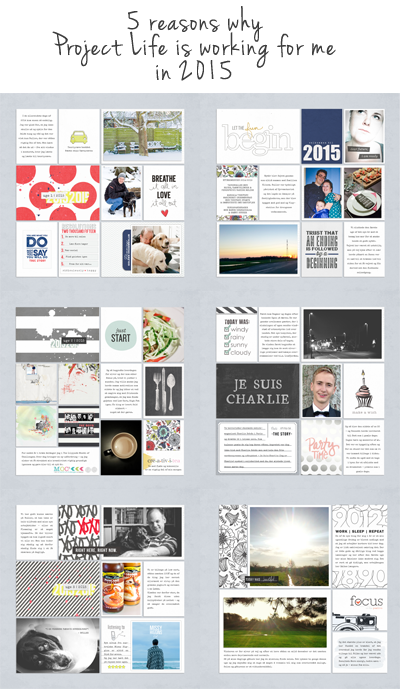 I've tried before. Possibly every year since Becky Higgins came up with the idea of Project Life. I loved the concept - and I even attempted a hybrid version which went bad almost straight away. So it certainly wasn't lack of enthusiasm that kept me from succeeding.

It would slowly start in week 2 where I would realize that I hadn't taken as many photos as I'd like. By week 3 if I had taken any photos at all I would consider it a small miracle and decide that it wasn't worth my time to even open PSE and start a layout.

The same story over and over.

So when 2014 turned into 2015 and I once more decided to give it a good old try - I knew myself better than to start off by announcing to the world that this would definitely be year I was going to last more than a couple of weeks.

Sure I hinted something about it on Instagram. I did show a few screenshots after a few weeks but even if I was already beating my own record I was not quite ready to share it yet, thinking that any minute now I would fail. I still get that feeling.

Week 1 was a blast. Week 2 I realized I had almost no photos but decided to at least try and put something together. Week 3 I chose to make the photos ridiculously large. Week 4 I realized that all the photos were from the same day and somehow had felt forced. Week 5 I decided to use an entire page to my MOC layouts.

This was the point where I seriously thought about quitting because if I didn't have anything to talk about apart from those layouts week 5 would most likely consist of a single photos and a word art because I couldn't be bothered with writing anything myself. 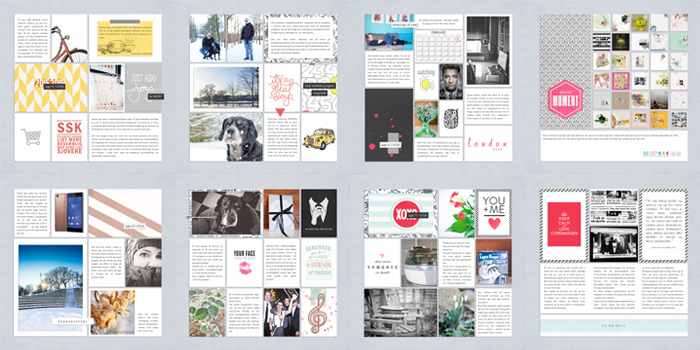 So at the end of week 6 I had decided to delete the folder when I turned on my computer but something happened. I looked at the previous weeks and suddenly I saw it for what it was. It was the story of my life. The good, the bad, the really boring.

So what's different this time?

1.The layout is much more simple. I keep it mainly white with a few patterns to lighten it up a bit. This also means that I've adapted a lot of the journaling cards I've been using. You see white is not just white. So I decided from the beginning on one particular white background and have been adapting almost all of the cards ever since. I really like the cohesive look it gives the pages.

2. I've come to terms with that some weeks I just don't take as many photos. If I have a new photo - great. If I have an older photo that fits the journaling - fine. If I have to find something online - that'll work too. What I came to realize is that it isn't the photos alone that tells the stories. I know, I know - you all figured that out long ago, right? Well, just call me slow!

3. My life isn't perfect - and therefore I can't expect my layouts to be perfect either. I'm married but we don't have any children. My husband work far too much and I waste too much time on doing nothing exciting. All in all it results in a very boring life at times - but it is my life. And that's perhaps a fourth reason why it's working out better this time around.

4. I'm okay with that this more than anything is a visual diary of just my life. Sure my husband makes his appearance from time to time but more that anything else it is my stories, my life. However even to this there's a small but...

5. I've included things from the news which isn't exactly stuff from my everyday life and yet it is. Because what goes on in the world around me has a huge impact on my life. Like the terror attack in Copenhagen.

As I was making the layout I realized that any small story from that week meant nothing in comparison to what happened in Copenhagen and therefore I had no problem using up an entire page on it.

So there you have it. I'm close to up to date. I've never been able to keep it up for that long and although my pages aren't as pretty or fancy as many others nor are my photos or life in general anything fancy, I still look at them and feel extremely proud to have made it this far.