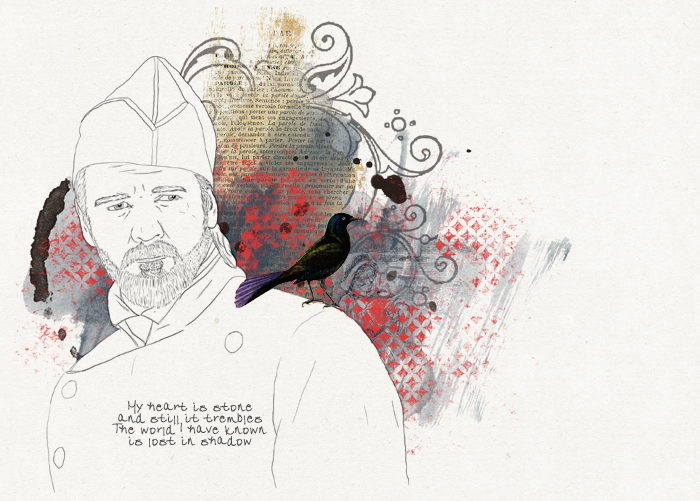 I didn't get a whole lot done this week (either). Just a couple of pages. The top one is using lyrics from Les Miserables. I often use Les Mis for inspiration. It's just so intense and dark and yet full of love and freedom and passion. Perhaps I like it so much because it reminds me a bit of myself. 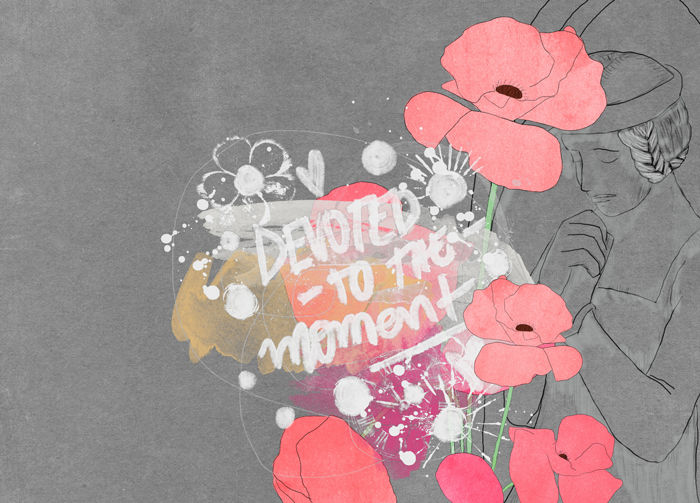 We went to a Confirmation last week and while the priest at the church was a very poor speaker he actually had some pretty good ideas and while none of them were new they still stuck with me. One point being that our place in the universe and in time is so infinite small from the beginning that we should focus on that and stop believing we had to change the world with everything we do in order to be called successful. Devote ourselves to our present - to this very moment in time which we with all right in the world could call ours.
If you've visited my blog before you'll know I'm leaning towards dark and twisted with a lot of stuff to sort out but I keep choosing life so I guess there's hope for me yet. And I kept his words with me - okay actually I interpreted them a bit...

Be devoted to the moment and let go of the rest.

And I did actually move one step closer to letting go and get messy as has been my challenge these past couple of weeks. I pulled out the paint, the mist spray and the paper punch and well my hands were covered in paint afterwards so perhaps I should have taken a photo just to proof it.  I know if I had only painted first and then cut the stars it would probably not have been as messy - but hey I'm still learning. 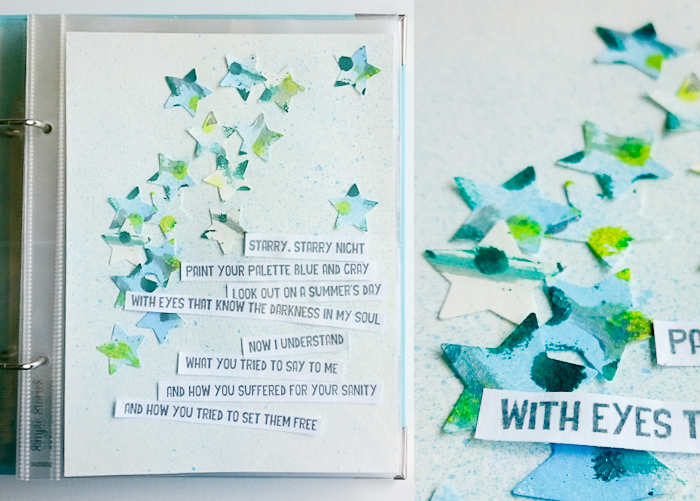 I feel a need to go back and add more stuff to this one but at the same time I like that it is so simply.
The song - Vincent - is one that is very near to my heart. I had a friend who once told me that he felt it had been written about him and as the song goes...

You took your life, as lovers often do
But I could've told you Vincent
This world was never meant for
One as beautiful as you

... my heart breaks every time. Because my friend decided that since the world didn't understand him, he had no reason to stick around. It's been years and years since that day his brother called me to tell me of the suicide and I still get this empty feeling inside. Knowing that he won't be there. He's one of my missing pieces. So perhaps yes, keeping it simple, is better.

I didn't mean to turn this into some sad story and I don't know why he's been on my mind this week but he has. Sometimes memories just come floating by and reminds me of who I've been while I should have focused more on who I am.

I thought a lot about what my challenge this week should be and it has been quite clear these past weeks that I've created less and less and I know creating is good for soul. So the challenge will be to create something every single day. I think I'm going to do art postcards. I did them daily in December and really loved the process so I'll give it another try.

As usual I'll be linking up to Paint Party Friday, Art Journal Every Day and Kim Dellow's Show your face. Thank you for stopping by - I love hearing from you all and I am grateful for each and every comment.